Support on this Function Block has been retired. You can find documentation for the Intelligent Room Controller V2 by clicking here >>

The Intelligent Room Controller is the core block required for heating setups. The block operates off of heating/cooling seasons, target temperatures, heating/cooling modes based off of these targets and a potential heating schedule. Once you have setup your heating schedules (or other methods of controlling the timing of the heat), the block actually learns how long it takes for the room it is assigned to heat up and cool down. By doing this it can be dead accurate with it’s scheduling and ensure that it always hits the target it has been set.

The intelligent room controller takes time to learn the thermal dynamics of the room. We recommend setting up the schedules and then leaving the controller for a few days or ideally a week so that it can learn.

Even with really straightforward programming, the Intelligent room controller can be made to be fully functional for individual room control in an automatic mode.

First connect the temperature sensor in the room to the input AI, then either or both a proportional valve actuator to the output AQ or a digital actuator to Q. That’s it! Now the schedules can be set easily in the UI with the Apps or the web interface.

If the sunshine is not taken into account, you can remove the output by unticking a tickbox in the properties of the room controller.

The outputs on the Intelligent room controller Q, Q2 and Qc are pulse width modulated outputs. The automatic parameters for the block determine the optimum control for these outputs.

The Intelligent Room Controller (IRC) has the ability to learn how quickly the room will heat up/cool down. When you first save a fully configured IRC into a Miniserver (it has the ability to track the temperature and control it) it will enter a learning state for 1 week. In this state, it will be learning at what times it will need to turn the heating/cooling systems on in order to hit your set target temperature at the set time.

Because of the fact that it learns for the first week, it is best practice to not use manual overrides whilst it is learning as it can skew the IRCs learning pattern. If the room was heating up at a rate of 3 degrees/minute and then suddenly you have overridden it to be 5 degrees higher, and now it’s heating up at 5 degrees/minute, it’s not going to know that you have overridden it, it will just know that this room is heating up much faster, so it will now turn the heating on later than it did before.

It is vital that the heating/cooling systems in place are capable of hitting your target temperatures. If you had a really badly insulated room, and wanted it to hit 30 degrees, but the thermal loss rating of the room is too high, so that the room cannot ever hit 30 degrees, then the IRC will be stuck in a loop of turning on earlier and earlier as it cannot hit this temperature. In this instance, you will have to lower the target temperature to something the room can actually achieve.

The learning data for each Intelligent Room Controllers is bound to each individual block. This means that if you were to setup a Loxone system with heating included, and then add another IRC later on but copy and paste it, it will have the learned timings from the copied block, thus causing inaccurate and odd behavior. It is best practice to setup IRCs manually from scratch instead of copy and paste them across. Because of this fact, if you require an IRC to relearn its timings, then you can simply delete and add in another, replacement Intelligent Room Controller block.

A crucial part of the IRC is its intelligence. Because of how the block behaves, it is extremely important to try and leave it as bare bones as possible, aiming for just temperature inputs and then valve outputs without any blocks in between. The reasoning behind this is because, if you have some custom logic that turns the heating off if you are out, the IRC is telling the room to heat up, but it’s not heating so it thinks that it’s timings are off and will try to turn the heating on earlier and earlier. The goal of an IRC is to look like this:

It is important to not have 2 IRCs assigned to 1 room. This is due to the fact that, each IRC would be controlling something else (say a towel rail and bathroom heating), and these are both sources of heat. Both of these could come on at the same time, rapidly heating the room up, whereas the towel rail could then come on at a different time, heating the room at a much slower pace. This would result in the IRCs getting out of sync and causing heating/cooling conflictions: the towel rail one decides: “we need heat” but the overall room one does not and so turns cooling systems on. In this instance, it is recommended to have the towel rail act as a dumb system: on a timer, instead of an IRC for example. 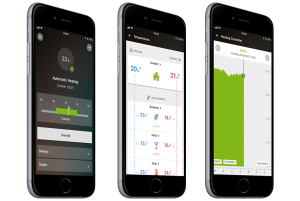