This function block monitors the current load in a building and protects against overload. If the maximum permissible power (MaxP) is exceeded, loads assigned to the function block are shed and blocked based on priority.

Only loads that can be switched, either directly, or via an interface can be used.

The loads, including their power, that are to be shed in the event of an overload are specified in the configuration window that opens when the block is added or via the block's settings.

The top entry has the highest priority for load shedding, i.e. it is locked first. Should this be insufficient, additional entries are locked according to their priority: 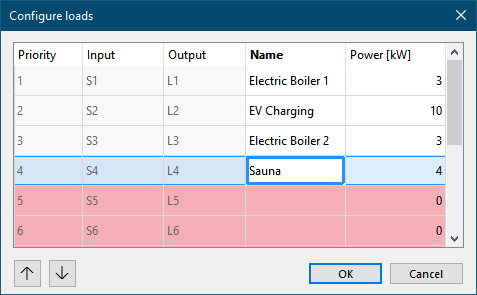 In this example, we control two boilers, a charging station for an electric vehicle, and the sauna. Up to 12 loads can be configured using the function block.
The inputs and outputs of the block are then connected in programming:

The outputs of the function block, in the example (L1 - 4), are used to lock the loads. An active output means a locked load.
Additional logic will most likely be required, since loads are rarely switched by the block alone, but are only enabled or disabled by the block.

As soon as an overload is detected, the first load is locked. If locking the first load does not resolve the overload, additional loads will be locked.
After locking one or more loads, a 10-second waiting period will allow the system to stabilize before the load condition is re-evaluated and, if necessary, additional loads will be locked or re-enabled.

Loads are re-enabled in reverse order once sufficient power is available again, i.e. the load's power +10 percent would not lead to an overload when it is switched on. Only one load is switched on at a time, 10 seconds after which the load condition is checked again.

The user interface shows the current load conditions and the status of the used loads: 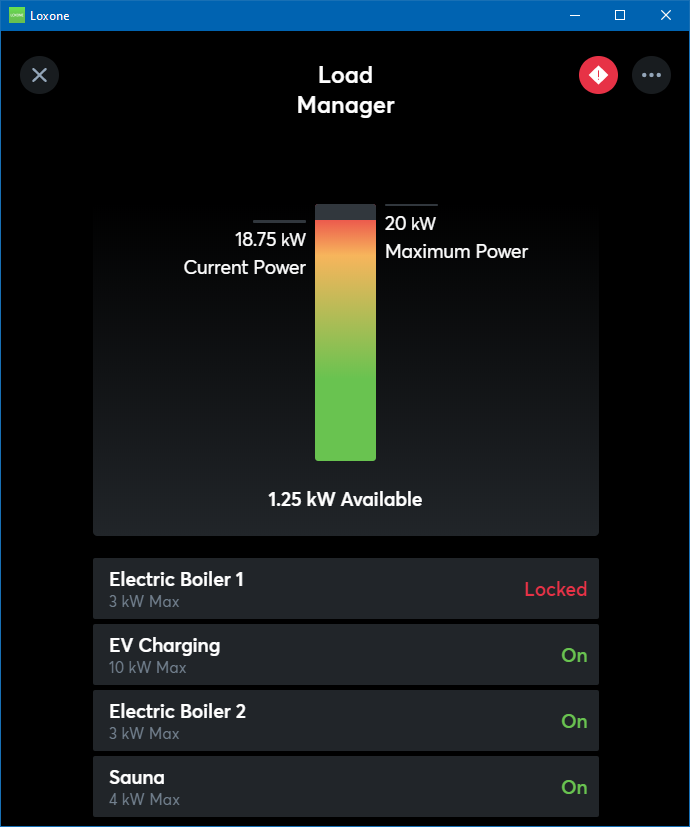 With the "Peak load manager" working mode, the load manager determines the average power every 15min or at adjustable time intervals, and sheds loads when exceeded.

Therefore, activate the working mode in the properties window:

Double-click on the block to open the configuration window, where the Power, Maximum off time and Minimum on time of the respective loads can be specified:

With each new value sent from the meter interface to the input (Gi), the current average power (AvgP) is calculated for each quarter hour or since the last trigger pulse.

When the current average power (AvgP) exceeds the maximum power (maxP), the load manager starts shedding loads, starting with the load with the highest priority.

Loads are re-enabled in reverse order once sufficient power is available again, specified in parameter (Hys).
However, if the "Maximum off time" of a load has expired, it is re-enabled back on. If the maximum power is still exceeded, this load is shedded again after its "Minimum on time".