The Lighting Controller function block enables the control and operation of lighting in a room or an area.
It supports switched and dimmed lighting as well as coloured light and luminaires with different interfaces.

The individual lights can be adjusted as desired and any combination can be saved as a lighting mood.

In combination with presence or motion detectors and brightness sensors, the block provides automatic lighting control.

Apart from the Loxone App, it is operated by the centre button of a Loxone Touch according to the switch standard, or by conventional buttons.

You can find inspiration and use cases regarding the numerous possibilities with lighting control on our website.

The following example shows the basic programming of the block:

The different actuators or lighting circuits can be connected to the outputs of the block. The above example shows some possibilities:
(Q1) is used to switch a conventional light via a relay output.
(AQ1) is used to control a dimmable light.
The SMA actuator controls an LED strip via an RGBW Dimmer and allows the control of colored lighting.
The LG actuator combines multiple lights into a lighting group, and controls them together.

Double-click on the block to access the settings for the light circuits.
Here you can define the names for the individual lights, which are used in the user interface.
The actuator type is automatically selected to match the connected actuator. 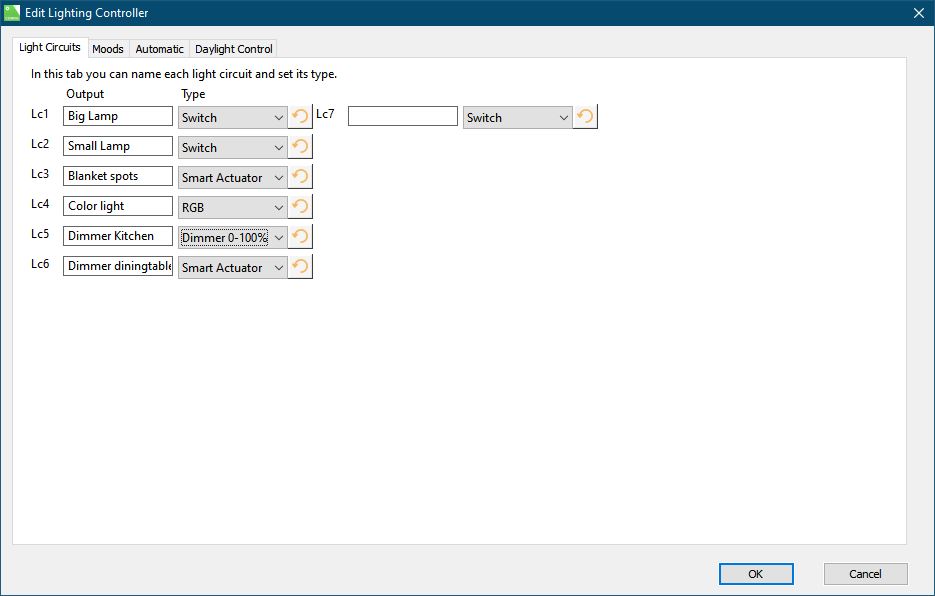 Settings of the actuator type: 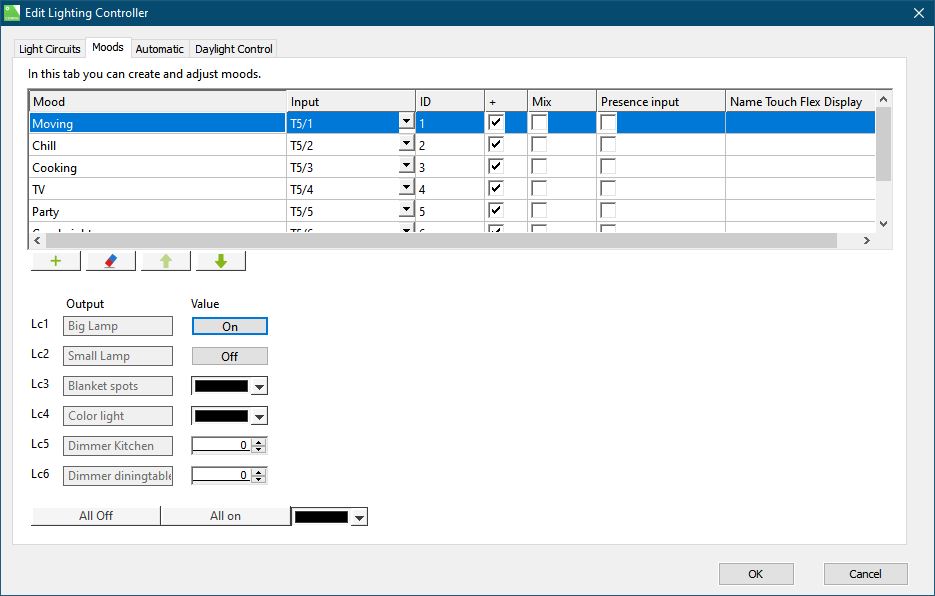 Under the tab Moods, which you can reach by double-clicking on the light control, you have the ability to create up to 89 different lighting moods. Moods can be activated via input (Mood). A total of 8 moods can be assigned to the Loxone Touch inputs (T5/1-8). The inputs (Buzzer), (On) and (Off) can also be configured here.

Mixing of light moods: By default, a one second click mixes the mood assigned to the respective (T5) input with the currently active mood. If "Mix" is checked, the mood is mixed in by a single click. If an output is used by two lighting moods, the higher brightness of the output takes priority. 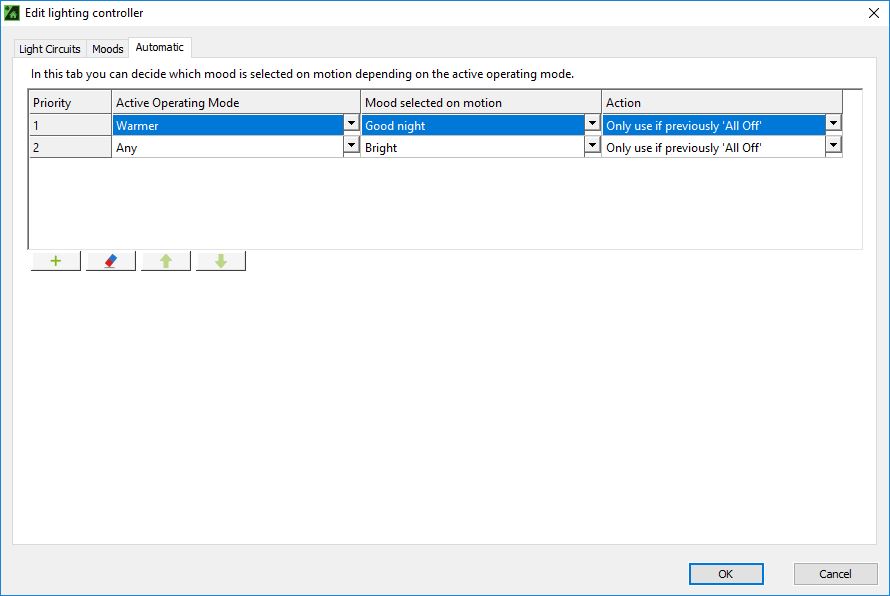 In the "Automatic" tab, you specify the mood that is to be activated for a specific operating mode when presence/motion is detected. The individual operating modes can be prioritized using the arrow buttons.

Use the "Action" column to specify if and under which conditions a certain mood should activate on presence/motion. The following actions are available:

- Only use if previously "All Off": Mood is only activated if no lights are currently on.

- Mix with current mood: Mood is mixed in with the currently active mood and mixed out again after the end of the presence/motion.

Inputs T5/1-8 can be configured as presence inputs by ticking the box for presence in the mood settings. This changes the input name to P/1-P/8

The mood is not dependent on currently active operating modes, but is always the mood assigned to the input.

In contrast to the motion sensor input (Mo), the Lighting Controller's parameter (Moet) has no effect on presence! The mood remains active as long as the presence input (P) is also (ON).

Mixing in the mood via presence inputs is deactivated if the input (DisP) is active or the minimum brightness at input (Br) has been exceeded.

If the mood was changed manually after being activated by presence, the light is switched off after the extend time (Met) has elapsed if no more motion or presence inputs are active.