The individual steps are programmed line by line, a group of lines that performs a specific function is referred to as a sequence.

The following example shows a simple application for domestic water heating, in which two hot water tanks are heated consecutively by a central heater.

The temperatures of the heater, the two hot water tanks and the temperature setpoint for the hot water are provided at the function block's inputs.
Sequence 1 is started via the (S1) input, in this example by a pulse at a specific time.
The heater, pumps and valves are controlled via the outputs:

Double-click on the function block to open the programming window.
The library on the left side of the window lists the available inputs, outputs, commands and variables.
Double-clicking on one of these objects will insert it into the editor window on the right where it can be further customized: 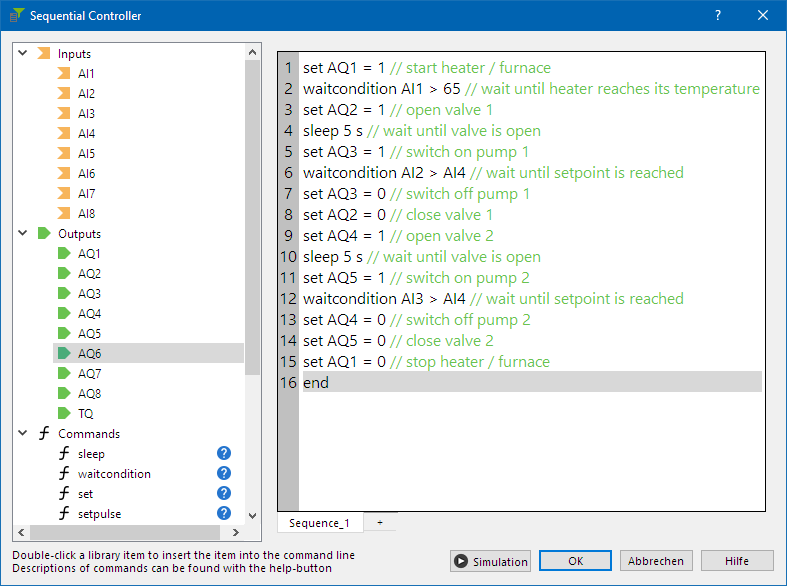 Each line must begin with a command, as can be seen in the example above.
The green comments are not required for the sequence to function, but allow to document the individual steps.

Note: This example is intended to provide an overview of the function block and its functionality. It can be applied to a specific application only to a limited extent.

Sequences are executed line by line at an adjustable interval. Specific sections can be skipped using conditions or delayed by time commands.
It is possible to create multiple sequences, each sequence can be started individually or switched to using a command.

The function block also includes a syntax check, which highlights syntax errors while editing a sequence. Invalid or empty lines are skipped when the sequence is running.

A programming line always starts with the desired function, followed by the required parameters and operators, each separated by a space.

The inputs and outputs specified in the library of the block can be set or queried.
If an input is connected to logic, the last set value is valid. Changes to the input overwrite the value set by a sequence.

The commands supported by the Formula function block can be used to set and compare outputs(e.g. SET AQ1 = AI2 * 3).

Available inputs: (AI1 - 8). The input names can be customized in the dialog.

Available outputs: (AQ1 - 8). The output names can be customized in the dialog.

Variables: value1 - value5. The variable names can be customized in the dialog.
Variables are used to process values that are not available at the IOs. They can be set like IOs, used in calculations or as a memory.

Return
If the current sequence was started by another sequence with [startsequence], this command returns to the calling sequence and proceeds to its next line
Syntax: return

Goto
Go to specific line
Syntax: goto [value]
Examples:
goto 1 (starts the sequence from the beginning)
goto 23 (jumps to line 23 and continues from there)

If
"If" checks whether a condition is true first. Only if the condition is true, the subsequent commands up to "endif" are executed.
Syntax: if [left term] [operator] [right term] ... endif
Example:
if AQ3 >= 4
set AQ1 = AQ3
endif