The Loxone NFC Code Touch Air is used for access control and features an NFC reader and illuminated keypad on a glass surface.

Access control solution via NFC tags, available as key fobs, stickers or cards. Alternatively, a numeric code can be entered on the keypad.

The device can be operated either with an external power supply or with two AAA batteries.
In battery operation, the permanent keypad illumination and the controllable status LEDs are not available. These are only activated for a short time when the device is operated.

Fasten the included plastic mounting frame to a flat surface or to a 68mm installation box.

A junction box is highly recommended when using an external power supply, as it makes it much easier to tuck away connecting wires or a spare loop behind the device.
Optionally, a small power supply unit can be installed in the box. 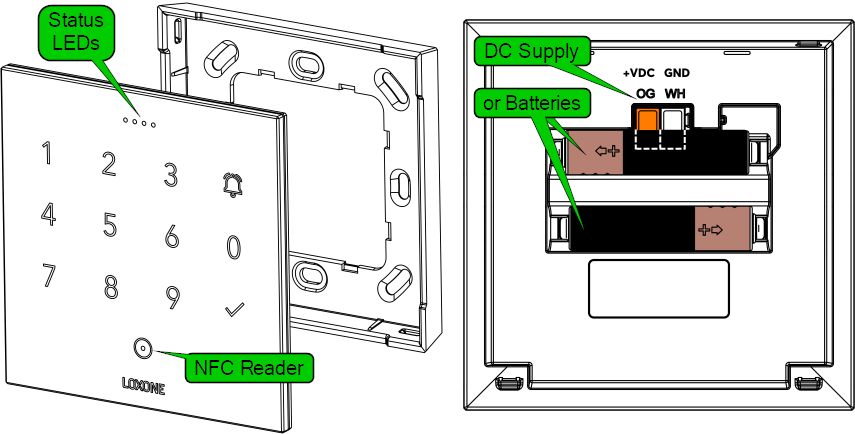 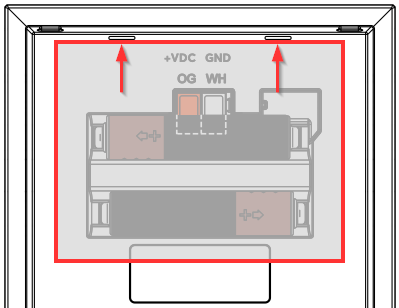 The NFC Code Touch is first inserted into the top of the frame and then snapped into place at the bottom. To release the device, pull firmly on the bottom to disengage the latch.

A suction cup can be used to detach the device from the aluminium frame.

In delivery state, pairing mode will be active after the power supply has been established. This is indicated by the right status LED flashing red/green/orange.

To activate the pairing mode manually, switch off the power for 10 seconds, then switch it back on. If no connection to a Miniserver can be established for five minutes, pairing mode will be activated for a limited time.

The available functions differ depending on whether the device is battery operated or connected to an external power supply. This is determined during pairing. The device must therefore be paired in the same supply method in which it is to be operated later.
If the supply method is changed later, the device must be deleted from the configuration and paired again.

Only then can the device evaluate access codes and NFC tags and display them correctly via the LED status.

In order to gain access to a building, a paired NFC tag is held up to the NFC reader on the device. The tag is read and authorization is verified.
When battery powered, the device must be activated by pressing the checkmark or another key before using an NFC tag.

In order to authenticate using an access code, enter the numeric code on the keypad, followed by the 'tick'.

If the authorisation was successful, access is granted and the status LEDs light up green. As an example, the door can then be unlocked. If access is denied, the LEDs light up red.

Additional functions can be selected by entering a prefix.
To do so, first enter the prefix number set in the configuration and then hold the NFC tag up to the reader.
When using a code, first enter the prefix, then confirm with the 'tick', followed by the access code.
After successful authorisation, the function assigned to the prefix is activated.

If an unauthorized NFC tag or numeric code is attempted several times in succession, the device is locked for 2 minutes for further operation, including all keys. This protection prevents brute force attacks.
An authorized NFC tag can unlock the device before that time.

Configuration also allows you to limit access via NFC tag or code to specific times, or set them up for one-time use.

More information can be found in the documentation of the Authentication NFC Code Touch function block.

A row of four LEDs at the top of the device actives during operation, and also indicates whether access was granted or denied.
The following table shows the possible LED states:

To replace the batteries, remove the NFC Code Touch Air from the mounting frame. Remove both AAA batteries from the compartment on the back and insert new ones, observing correct polarity.
The device then restarts and the right status LED flashes green three times, indicating that the connection to the Miniserver has been established.
In case the LED does not blink at all or is permanently (faintly) red, the batteries are empty.

In some settings, it may be necessary to change the sensitivity of the keypad.
This is done by sending web service commands from a browser. If battery powered, first select keep device awake in device status, and press any button.

Each key can be addressed via a TH number:

Each key has a certain value assigned to it. First this value has to be queried. Example for key 3:
http://miniserver/dev/sys/wsdevice/serial/get/TH6
The result for example is value 25. Make a note of this value so that you can restore it later.

You can now reduce the sensitivity by assigning a higher value:
http://miniserver/dev/sys/wsdevice/serial/store/TH6/26
To increase the sensitivity, select a lower number.
Numbers below 10 do not need a leading zero.

Finally, the change must be accepted by restarting the device:
http://miniserver/dev/sys/wsdevice/serial/Reboot

Change the sensitivity only in small steps as in the example. Check if the keys react accordingly. If the change is not sufficient, the command can be repeated with a higher/lower number.

When connecting to an external power supply, the installation must be carried out by a qualified technician in accordance with all applicable regulations.

The device must not be used as part of safety-critical systems.

For security reasons we strongly recommend that you only use encrypted NFC tags from Loxone for access control.