Based on cost considerations and depending on your installation plans, we generally recommend using conventional push buttons as digital inputs on the Miniserver and Extension or utilising the Loxone Tree or Loxone Air technologies. Under certain conditions, combining EIB sensors with Loxone actuators makes sense. For example the customer desires a specific EIB push button. Below, we focus on the use of EIB sensors.

The following screenshots show a Jung-4X push-button in ETS and then in Loxone Config.

If the push button is configured as described, you can use the Loxone Miniserver for anything.

If your EIB push button does not support this, use the ‘EIB Extended Sensor’. 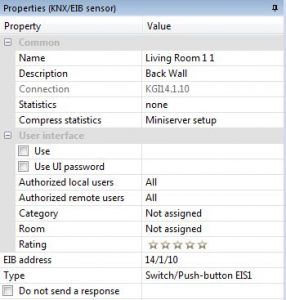