You can implement fire and water detection into the Loxone system with little effort using the Fire and Water Alarm function block. In addition, smoke detectors, temperature sensors can also be used for fire detection.

This device is used to alert you if a fire breaks out in your Smart Home or if water leaks.

Loxone’s own products, such as Fire Detectors Air and Water Sensor Air, are automatically detected and used. External products can be connected to the inputs. Temperature sensors can also be used for fire detection.

In addition, music server zones, light control modules and automatic blinds blocks can be selected directly in the module for the acoustic alarming.

As with all function blocks, you can find and insert the Fire Alarm block by searching through the “F5” menu. Any Air enabled Smoke Detectors and Temperature Sensors or Tree Temperature Sensors can be integrated with the block by double clicking on the block. After this, simply tick the devices you want to include as sensors for the Fire Alarm. If you have already set up a Loxone Music Server within your configuration, Music Server Zones will also appear in this menu, allowing you to tick the zones you want to play the Fire Alarm siren in. 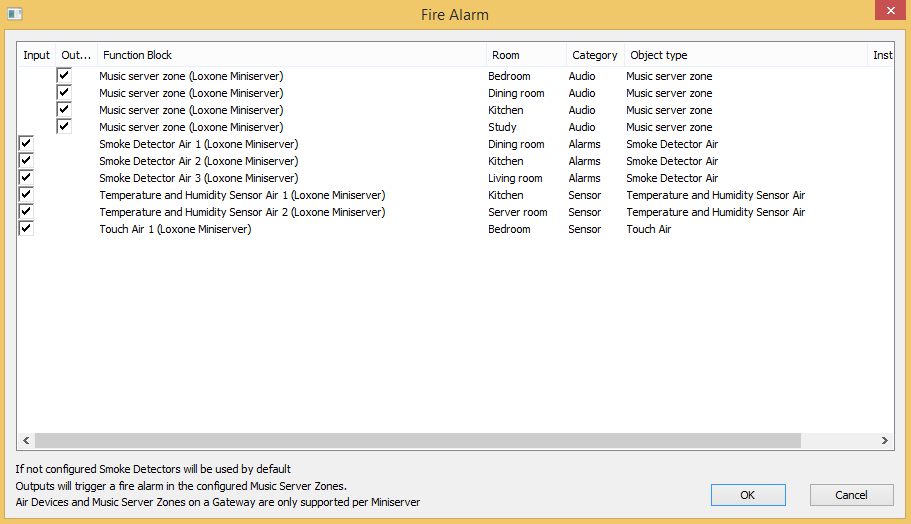 Water sensors can be connected to input Iw.

A siren can be connected to output Qh.

In the case of an alarm, the siren sound is played over the Music Server, the lighting flashes and the shading opens fully. 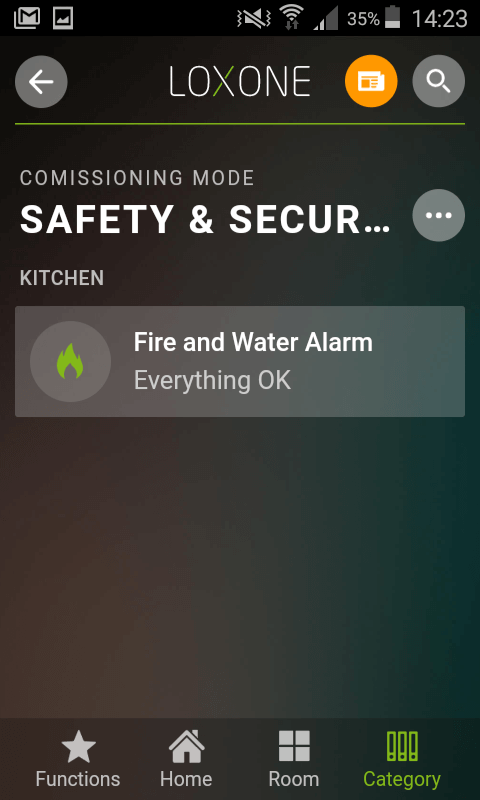 The “Last sensors” view shows the last triggered sensors. The number of these can be set in the properties of the block. 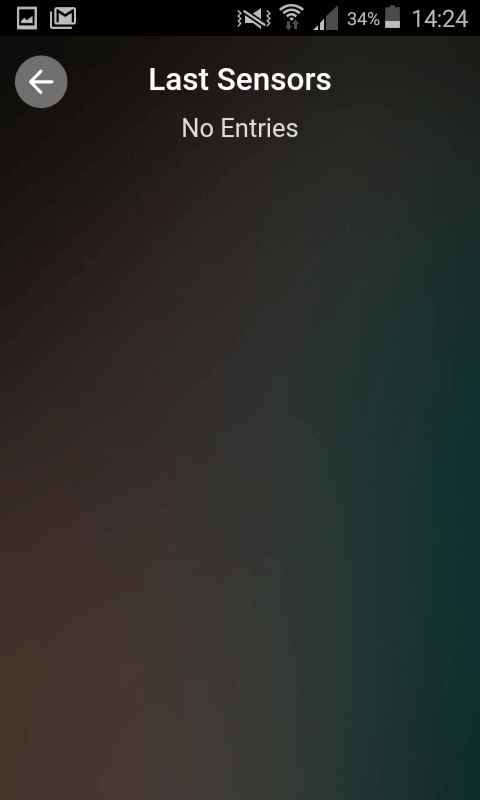 In compliance with wiring regulations all circuits must be protected by an RCD and appropriately rated MCB. However, this protective measure on it’s own won’t be able to identify fault arcs.

Fault arcs can be caused by unsafe or exposed contacts or damaged wiring or cable insulation. We therefore recommend that the electrical installation in a Loxone Smart Home also has external electrical fault detection equipment (e.g. arc fault detectors). As Loxone, we don’t sell Arc Fault Detection Devices (AFDD) but using such a component in a Loxone Smart Home is best practice.

When it comes to fire alarm systems, you can already connect a fire alarm switch to the digital input of a Miniserver or Extension to trigger alerts through a Loxone Smart Home in the event of a fire.

We’ve taken it a step further. Using AFDDs for fire protection has long been standard, if not mandatory in industrial installations. Even though a Loxone system is designed for domestic installations, our system can now specifically take a signal from an AFDD and trigger a fault arc notification. You’ll find a dedicated Input (If) in the Fire and Water Alarm Function Block.

In this example, a warning light and a caller were also linked to Q1. The caller informs you about the alarm by telephone.

As soon as a smoke detector triggers or a temperature sensor exceeds the maximum temperature (parameter Tm), the pre-alarm is started and output Q1 is activated. The pre-alarm is a silent alarm, which means that the siren is not switched on at this time. If the alarm is not acknowledged via the app or a pulse to input C within a certain time (parameter Dm), the main alarm will start. The main alarm also activates the input Q2 as well as the siren.