With this function block, surplus energy, which is otherwise fed into the grid, can be used optimally.

The block supports up to 12 consumers which can be set to have different priorities. If more electricity is being produced than is currently being consumed then the different consumers will turn on automatically.

If there is a surplus, the Energy Manager tries to switch on as many devices as possible, starting with the lowest connected load.

Of course, you may want, for example, the washing machine to start immediately, because you need the laundry to be done that same day. With the trigger inputs you can temporarily change the priorities and immediately activate a consumer.

For the Energy manager to work the block has to know the current power production and consumption.

The current power production needs to be connected to the AIp input. If more power is produced than is consumed (i.e. fed into the grid), the value is negative, otherwise it is positive.
Then connect the loads to the digital outputs of the block (Q1-Q12). Of course you can also program additional logic.

If you want to manually activate a consumer, for example by pressing a button, connect the digital input to the respective trigger input (Tr1-Tr12).

Now double-click on the Energy Manager block to access the editing window.

Enter the following information for all used outputs (each connected device): 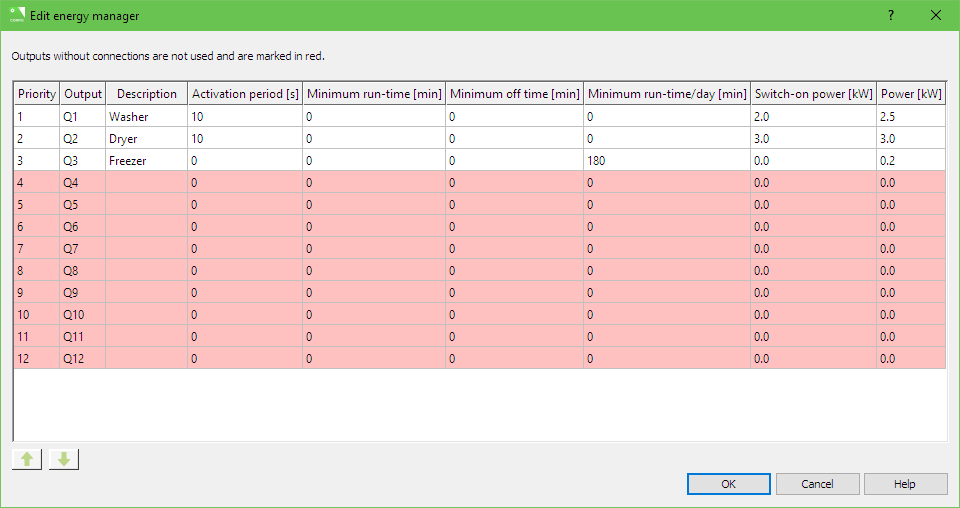 The block is supplied with the current power at input AIp. If more power is being produced than consumed (i.e. fed into the grid), the power is negative.

In case of negative power at input AIp, the Energy Manager tries to use the excess energy in an optimal way. The consumer with the lowest power is automatically activated if no activation time is specified. If energy is still available, additional consumers are switched on. As long as free energy is available, the Energy Manager tries to activate all outputs for the minimum run-time/day.

The consumers remain switched on for at least the time specified by the “Min. run-time” setting. After the consumer has been switched off again, it remains switched off for the “Min. off time”. The cycle is repeated at least until the minimum run-time per day (“Min. run-time/day”) has been reached. If the minimum run-time per day has been reached and there are no other outputs waiting (all outputs already operated or not enough surplus energy available), these outputs remain active nevertheless.

If you want to switch on a consumer immediately, you can trigger this with a pulse (shorter than one second) on the respective trigger input (Tr1 – Tr12). The output is then activated for the minimum on-time/day, even if no surplus energy is currently available.

If the pulse is longer than 1 second, the Energy Manager switches to manual mode. The output is now switched on until the input Tr is set to 0 again.

For consumers that have to be prepared or configured before switching on, an activation period can be specified.

With “switch-on power” you can specify the surplus energy required to activate the device. “Power” specifies the actual power as stated on the type plate or datasheet. This is used for example for PV systems in combination with a heat pump. If you have a 4kW PV system, but the heat pump requires 8kW, there would never be enough spare energy.

The offset “O” specifies the threshold for “spare” energy. The default is 0, i.e. the energy that would otherwise be fed into the grid is used. For example, if you set the offset to 3kW and the current total home consumption is 1.5kW, 1.5kW of energy would remain unused. The Energy Manager will switch on consumers until the offset is reached. This way you can ensure that devices are switched on even without photovoltaic energy, for example, but do not exceed a certain consumption.

The washing machine must first be loaded and the program selected. The activation time is used for this. A pulse at input Tr activates the output for the activation period. You can now close the washing machine door, select the desired washing program and start the machine. If there is surplus energy at that moment, the washing machine starts immediately and remains switched on for the required time. If there is no surplus energy, the output is switched off again after the activation period and waits until surplus energy is available.
The output AQr provides the remaining energy as an analog value which can be transmitted to an intelligent battery system. The battery system can then decide for itself whether there is enough energy available for charging.