The Automatic Shading function block is used to control shading devices such as blinds, roller shutters, curtains or awnings.
In addition to manual operation, shading can be automated, based on sunlight and room temperature, in combination with Intelligent Room Controller.
The goal is to avoid overheating of a room due to solar radiation.

The function block and the user interface adapt based on the following types:

2:Curtains on both sides

In addition, the compass direction is specified in parameter (Dir), to ensure that the sun position automatic is only activated when the sun is actually shining on the window. On demand, the Intelligent Room Controller requests shading via the output (Shd) to the input (Sps) of the Automatic Shading block.

When using venetian blinds, the parameters Rd, Bld, Bldo, Sw, Sd must also be set for them to be controlled correctly.

The sun position automatic begins when the sun reaches the shading area and ends when it passes.

During this time, the slats are adjusted according to the angle of the sun. At the end, the blinds move to the position specified with parameter (Spe).

Manual shading, independent of the sun's position, can be triggered via input (So) or in the App with "Slightly open". The slats are then adjusted horizontally.

The sun position automatic can be deactivated via input (DisSp).

If the blinds are operated manually during automatic mode (e.g. using an app), then the sun position automatic is deactivated for that day. To reactivate the automatic control, a pulse on input (Spr) or activation via App is necessary.

Output (Sp) indicates whether the sun position automatic is active.

Additional inputs, outputs and parameters may be required if standard push buttons are used or additional logic is programmed.

With parameter (Spos), the sun position automatic will be delayed by this number of minutes after sunrise.
This is relevant for windows that may not get the sun directly after sunrise.

With parameter (Spoe), the sun position automatic will be brought forward by this number of minutes before sunset.
This is relevant for windows that may be affected by the sun prior to sunset.

There are two possible applications for the two parameters:

Often the sun is obscured by other buildings, structures or trees after sunrise and before sunset. Here, the start or end time of the sun position automatic can be adapted to accommodate for these.

Another possibility is to shift the times so that sunrise or sunset can be seen with the shading open.

The parameter (Bld) is added to the required percentage of (Rd) when adjusting the slats, if the preceding run was in the same direction. The parameter only affects slat adjustment, as a change of direction is always necessary when the sun position automatic is activated. If the slat position is correct at the start of sun position automatic, but becomes inaccurate over the course of the day, this parameter must be adjusted.

The parameter (Bldo) is added to the required percentage of (Rd) when adjusting the slats, if the preceding run was in the opposite direction. If the slat position is already incorrect at the start of sun position automatic, the sum of (Rd + Bldo) is either too high (sun shines in between the slats) or too low (blind closed too far)

For windows facing east, there is only one change of direction, as the slats are opened more and more during the course of the day; for windows facing west, the blind changes direction when adjusting for the first time.

When the sun position automatic is active, the blind slats are adjusted based on the sun's position.
The slats are tilted to an angle that prevents any direct sunlight from entering in between them.

Generally, the adjustment is carried out at the intervals set with parameter (Spi), but only at 15° increments, and only if necessary.
If, for example, the sun's path is at a relatively constant angle, its elevation will hardly change. For this reason, an adjustment is not necessarily carried out at every interval.

When fully opening the blinds (via Co, central function block or the App), they are always activated for the entire UP duration, regardless of the current position. This ensures that the blinds move into the defined end position. This is equivalent to a reference run.

However, for safety reasons, when fully closing the blinds, they are only activated for the determined remaining run time.

The actual position of the blinds is stored in the Miniserver using the block's remanence function.

If e.g. the blinds are moving up and a power failure occurs immediately thereafter, the new position can not be registered by the Miniserver. When power returns, the system will remember the previous position of the blinds, although they are actually raised.

If a downwards movement is then triggered, it will not be executed at all or not far enough, because the previous position is still stored. Also the status displayed in the App will not match the actual position.

In such and similar cases, a complete open movement must first be executed, then the shading will again operate as expected.

Function for setting the end limits↑

Since Loxone Config version 12.1, shading technology specialists have had a function available in the visualisation of the block for setting the end positions of the shading.
This function is comparable to commercially available setting cables, and requires precise knowledge and observance of the operating instructions of the respective motor.

In the open visualisation of the block, the function can be called up in the menu. For users with full access, the function is then accessible after entering the password: 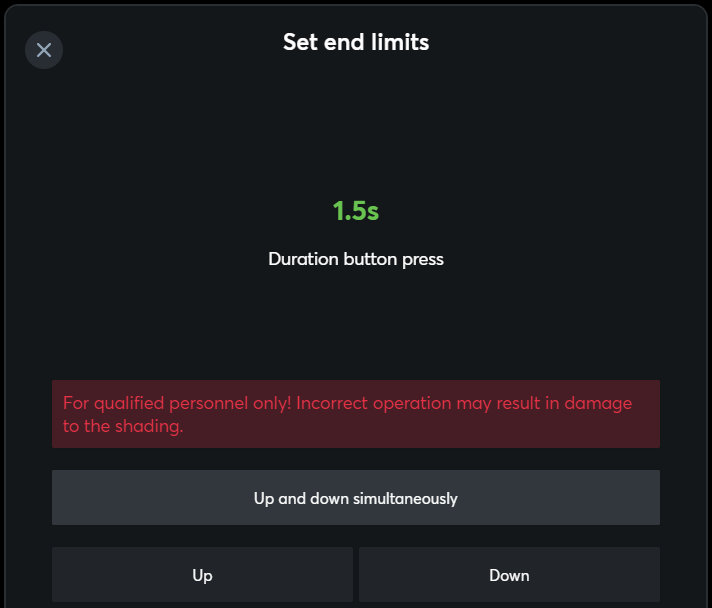