With the Audio Player function block you can define an Audio Zone. This is usually a room or an area of a building where you would audio playback is desired. The block is used with the outputs of the Audioserver or a Stereo Extension.

It is possible to create groups across rooms, providing a uniform music experience in open spaces.

For larger rooms, multiple speaker outputs are assigned to the same Audio Player function block. Each speaker output can be configured to output either the left or right channel signal, or a downmix of both channels.

The following image shows a programming example with an Audioserver and two Stereo Extensions:

The first Audio Player block in the living room uses the 2 stereo speaker outputs of the Audioserver, i.e. 2 pairs of speakers. Since it is the same room or area, only one Audio Player block is used. The Stereo LR output provides both channels and the combined actuator (ALR) passes them on to the Audioserver. On the device itself, the channels are output at the corresponding terminals for the left and right speakers.

The second Audio Player block in the bedroom is used with the stereo output of the Stereo Extension 1, i.e. one pair of speakers.

One of the two separated channels of Stereo Extension 2 was used on each of the two Audio Player blocks in the kitchen and garden, i.e. only one speaker per room.
The speakers are connected to the Stereo LR output of the block, so each speaker receives the full stereo signal, although the stereo effect is lost in this case. (Downmix)

A Loxone Touch of the respective room is connected to each block for operation according to the Loxone Switch Standard. Depending on the customer's preference, a Presence Sensor can be used, as shown in our example in the living room and kitchen.

Possible uses of the Stereo L and R outputs↑

The Stereo L and Stereo R outputs of the block provide only the signal of the respective channel.
The following examples show possible applications for this:

Example 1: The layout or usage of a room has changed, and the left and right channels must be swapped.
The stereo output can be separated, the right speaker output is then connected to the stereo L output of the block, and vice versa. In this way, the channels can be swapped without having to change the wiring:

Example 2: An odd number (3,5,7...) of speakers is used in a room.
The additional speaker could be provided with the full stereo signal, but if it is located on the left side of the room, for example, it makes sense to provide it with the left signal only:

Once the configuration has been saved to the Miniserver and it has been restarted, the Audio Player blocks are available in the corresponding rooms.

Options for music selection are available by clicking on the block in the app or the user interface:

Browse and select Internet radio stations, or add your Spotify account or a network location. Create favourites for each room to quickly access them.

When using a Loxone Touch, operation is via the two right buttons, according to the switch standard.

The same pattern of operation is used both in the App and for the Loxone Touch:

Button + (up): Increase volume. Double click: Skip to next favorite. If switched off, pressing + will also switch on.

Button - (down): Decrease volume. Double click: Switch off. If switched off, pressing - will also switch on.

The playback starts with the Startup volume according to parameter Vd. If you want the Audio Player to save the last selected volume and start with it, set parameter Vd to -1.

The Internet radio service TuneIn offers numerous radio stations and podcasts. You can search for stations in the app or user interface and add them to your favourites. To do this, click on the menu icon (3 dots) and select Save as Favourite. 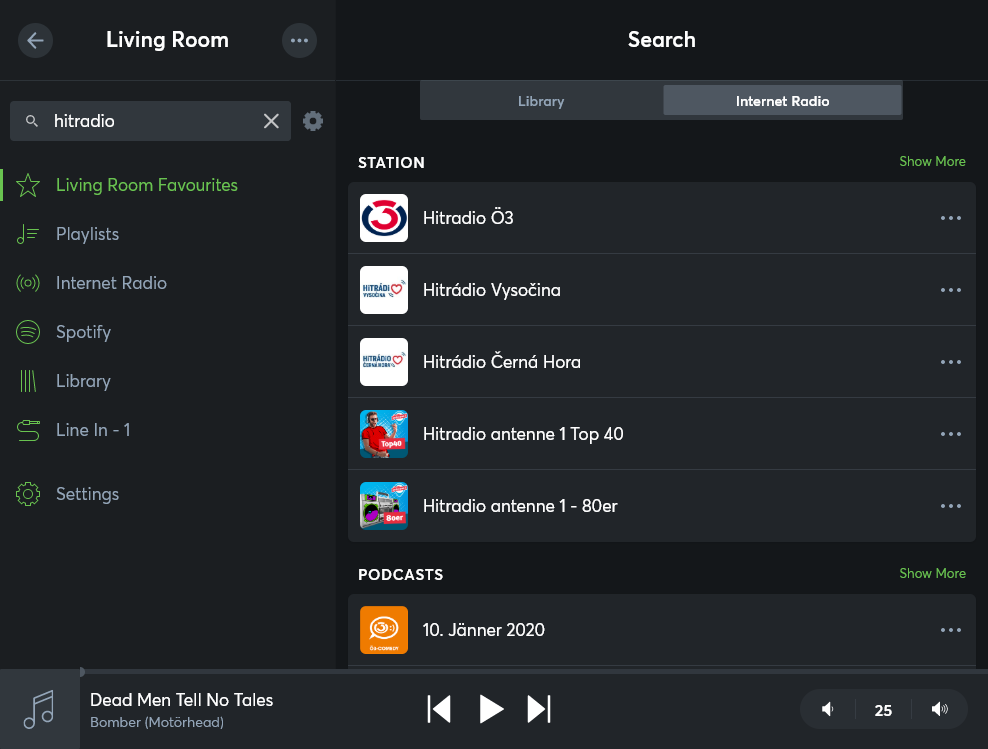 The integration with Spotify allows you to play your Spotify music or playlists directly on the Audioserver. Note that a Spotify Premium Account is required for this. 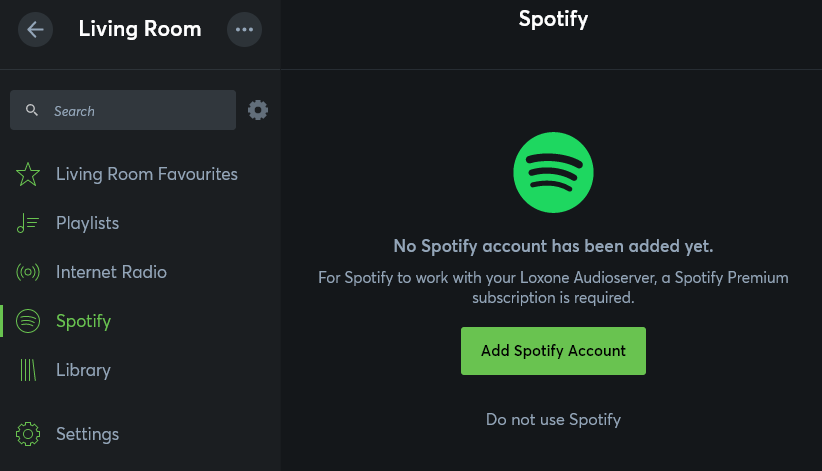 The service can now be used.

The library is visible when audio files are available on local drives or devices on the network: 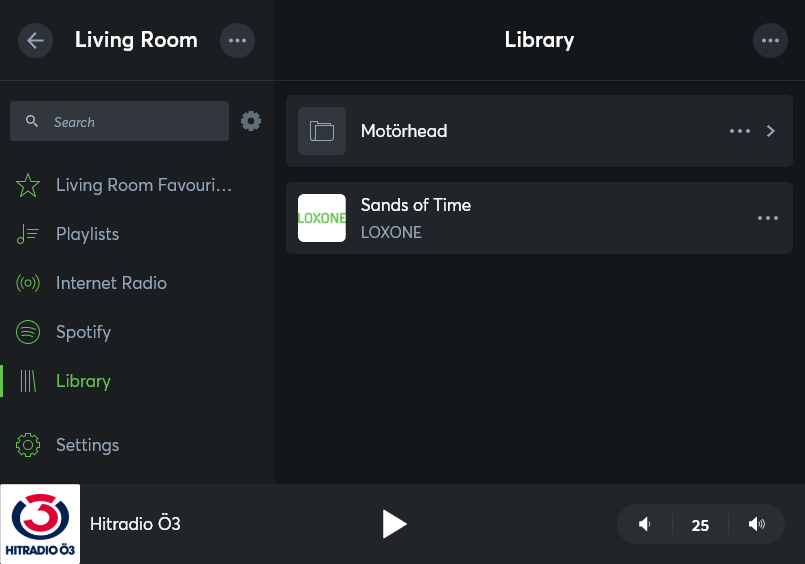 If necessary, display the library using the gear symbol to the right of the search field.

The following sections explain how to add available sources for audio files.

As soon as a USB drive is plugged in, the audio files on the drive are listed in the Library in the App or user interface.

Note that local files of an Audioserver are only available on the Audio Player blocks that are linked to that Audioserver.
If you want to access your music library from multiple Audioservers, add the files to the library via a central network share e.g. on a NAS.

Files on the Audioserver↑

In Windows, you can access them by entering the IP address or hostname of the Audioserver in Windows Explorer in the following format: \\192.168.1.7 or \\\hostname

The outdated protocol SMB1 is not supported for access. It may be necessary to change two registry entries in Windows 10 to the following values:

The Library folder on the SD card can be used to store audio files that can then be played from the library. Please keep in mind that the SD card is limited in size and speed. We recommended using a USB drive or a network share for larger music collections.

The folder Event_Sounds on the SD card contains audio files for system sounds such as doorbell, alarm clock, or alarm sounds. The system sounds can be changed by replacing these files. The new files must match the original file name and format, and replace the original ones.

The usb folder is visible when a USB drive is connected to the Audioserver. This allows you to add or remove files on the USB disk.

The Updates folder is reserved for update files that are manually copied to the Audioserver.

These local folders are only intended for easy management and maintenance, not for use as a network share to be added to the library on other Audioservers.

Note that local files of an Audioserver are only available on the Audio Player blocks that are linked to that Audioserver. If you want to access your music library from multiple Audioservers, add the files to the library via a central network share e.g. on a NAS.

SMB network shares can be added to the library. You only need to add a specific share once, it will then be available across all Audioservers or Audio Players.
To do this, click on Library in the App, then on the menu icon in the top right corner (three dots), then select Add network folder.

The following window opens. Enter the information for your network share:

Finally, click Add, after which the files will be imported and are then ready to be played from the library.

The outdated protocol SMB1 is not supported for access.

The analogue audio input (Line In) of the Audioserver can also be selected as source. Click on the gear symbol to the right of the search field to display the Line In. It can then be used: 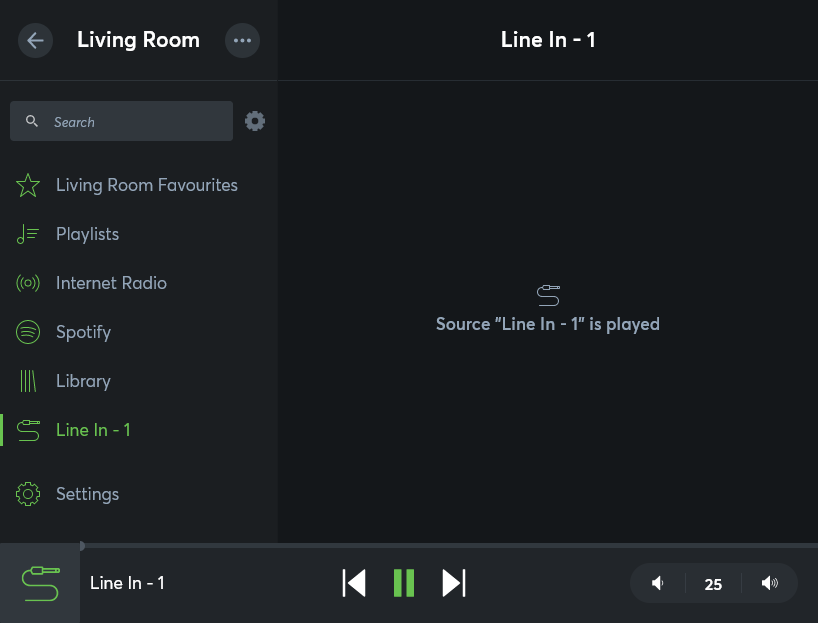 As of version 2.5.01.11, the Audioserver supports audio playback via AirPlay 2.
Each output will be available as an AirPlay receiver, and can be selected as a streaming device on Apple devices.

Streaming via AirPlay is independent of the Audio Player function block and takes priority as long as the Apple device is connected. Any playback from another source that is already in progress will be interrupted when AirPlay streaming is started.

For more information on how to use AirPlay and the system requirements, please refer to the Apple guide.

The Audio Player block's functionality is limited during AirPlay playback, as AirPlay is controlling the playback during this time. This results in the following special properties:

This is necessary because each individual output can be selected as an AirPlay streaming receiver. Audio groups are then managed by AirPlay, and can be created by manually selecting the desired outputs (speakers) in the app of the respective AirPlay device.

Other functions are not available during AirPlay playback, regardless of whether they are triggered from the App, by a button press, or logic.
Stop AirPlay playback or disconnect on the respective device to restore the previous functions and groups.