DIY Blog: First up, the iKettle vs a regular kettle!

We managed to get our hands on one of the new iKettles and thought that it was definitely something we wanted to have controlled from Loxone.

The Battle of the Kettles

In theory the iKettle is a great idea, as having devices that are controllable over the network makes it simple to control through Loxone. However the iKettle alone is yet another island solution, automation isn’t about the fridge that orders your milk or the latest TV that is “smart” because it can be controlled by an app. So why then are we wanting to incorporate it into Loxone? Why is the iKettle any better than a regular kettle? We want to stop it being an island solution and have it centrally controlled by the Miniserver. And why better than a regular kettle? So that when you pause the film on your DVD player through the Loxone app the lights dim up and the kettle turns on, or when you set an alarm clock your whole house wakes you up in the morning.

So to do this we needed to get the iKettle commands to use them within Loxone Config. The kettle is controlled via an app on your phone and when you do the app setup it configures the kettle to be on your home network.

Next through a port scan we found out you can actually see all the commands that are being sent to the kettle from the app on TCP/IP port 2000. The kettle also sent back updates when it changed its state. To see these commands we monitored the port using the tool Wireshark when sending the commands via the smart phone.

Next up was to test the commands. To do this we used a program called Hercules which allowed us to send the commands to the kettle on port 2000. Using a tool like this is useful as you can constantly make adjustments to the commands until they are right. Once the commands were tested and all working the final step was to add them into Loxone Config as a virtual output template (available to download at the bottom of the blog).

And voila! A simple user interface allows you to select your favourite temperature and make a cuppa, we also incorporated a timer so lunch time is started by the kettle boiling – a true smart kettle! 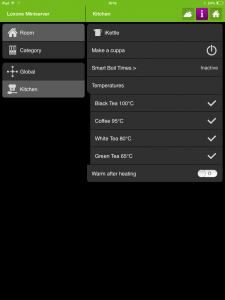 It’s all very nice, but you do still have to put the water in! Perhaps next time a smart coffee machine adaptation or a little robot to fill it up?

How to Save Money on Heating: 3 Top Tips