The Ideal Smart Home? A Look At This Year’s Ideal Home Show Offerings

A couple of weeks ago, I headed up to London to enjoy the delights of the Ideal Home Show. Naturally, once I had waded through the initial crowds gathered around the fountain at the entrance, I made a beeline for the technology section and arrived at the Virgin Media Ideal Smart Home.

Something in the kitchen instantly caught my attention, so I ventured in to see what dazzling new inventions awaited me. Dangling above the kitchen island were three smart lights, one of which was a lightbulb and Bluetooth speaker hybrid, which to me seemed curious. There’s the advantage of not having to drill speaker holes in your ceiling, for sure, but space saving has its limits and I wasn’t 100% convinced the sound quality was going to cut it.

On the other side of the counter lay a ‘smart diet scale’. I didn’t linger to read the full specification, but with the roaring success of apps like MyFitnessPal, I can see the thought process behind this. Certainly, this scale isn’t going to stop me buying a giant bag of Maltesers and eating the whole lot in one sitting, but I’m sure it’d be secretly judging me for it. I quietly imagine a future in which our eating habits are streamed directly to our GPs and/or life insurers. Perhaps they’d ration us, oh the horror. Onto the next…

The Samsung washing machine was quite a thing of beauty, in as far as domestic appliances can be considered beautiful. I can completely get on board with the idea of just tipping in an entire bottle of Persil and letting it sort itself out, but thanks to the eye-watering price, it remains at the bottom of my wishlist. Should it load, wash, unload, dry, iron and fold, however, then by all means sign me up.

The Pet Cube was fun and well designed. There are quite a few petcams on the market now, and I can see why people buy them to keep an eye on their canine companions. For me personally, watching my cats claw the furniture all day doesn’t appeal, but for those interested in setting up a petcam with Loxone, have a chat with Omid – he’s done an excellent job with a Lilin camera. 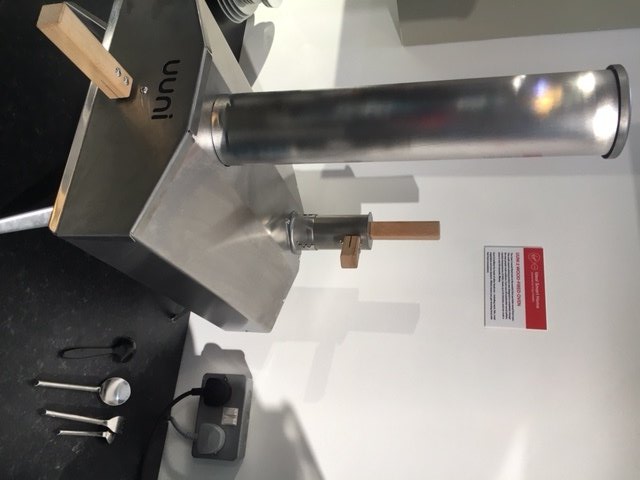 If you’re wondering what glorious item caught my eye upon arrival at this futuristic flat, it was the pizza oven. My other half’s a bit of a pizza connoisseur, so I had high hopes. Marketed as the world’s first portable wood-fired oven, this thing had style by the bucketload.

The problem? It wasn’t smart. Aside from being portable and possessing the ability to go from from 0 to crispy in under 90 seconds, this piccolo forno was a little superfluo; it was a kitchen showstopper nonetheless and I’m tempted.

Whilst all of the products on show were great in their own ways, the overwhelming majority were standalone or ‘island’ solutions. Most had their own apps, interfaces and clouds. Of course, plenty of products these days can integrate with each other, but the smart home on show felt a little fragmented.

There was nothing to bring all of these gadgets together and the prospect of managing all of them separately was far from ideal. Of course, my opinion isn’t exactly objective, since I’m biased towards a more centralised approach (ahem), so you’ll have to make up your own mind on the feasibility of controlling all these separate devices.

Oh, and apparently there was a nano drone doing the rounds. I didn’t see it myself, but maybe that’s the point.

Passing the iRobot stand, I contemplated buying a Braava 300 Mopping Robot, but couldn’t quite justify the price (I’m still considering it though!).

Instead, I settled with some ‘dumb’ vintage lightbulbs and headed home, wearily dreaming about possible locations for a pizza oven, gazebo and a swim lane…in my sloping garden that’s little bigger than a postage stamp.

Let’s talk about your next project…

From your first inquiry to the finishing touches on your project and beyond, your Loxone team will be there for you every step of the way. From the experience of 100,000+ Loxone Smart Homes and commercial buildings worldwide, we can confidently ensure your project exceeds your expectations.