There’s no shortage of smart home apps out there. In fact, the majority of the new off-the-shelf wireless smart home products are based wholly around their app. The only problem is that each product has its own app, and many products are focused solely on only one system in the house: lighting or heating or home security and so on.</p<

The Loxone Smart Home App is a little different, and that’s because we do things differently here. Our app can be used to control the entire house, since everything is centrally managed by the Miniserver. But you probably already knew that.

In October 2014, we completely overhauled our app. It was completely redesigned and rewritten, and launched as a public beta in the Google Play Store and the Apple AppStore. The redesign allowed us to bring in many new improvements for the ever-growing number of function blocks that are available in Loxone Config.

The transformation was so great that the new app generated a huge amount of interest – some of you loved it, some of you really didn’t. Overall though, the public beta app has been a great success – it’s been downloaded over 20,000 times and is used in Loxone Smart Homes across the world daily.

In October 2014 we launched the redesigned Loxone Smart Home App as a public beta for iOS and Android devices. This brought a completely new design and improvements in usability, and has since been downloaded over 20,000 times.

With critical feedback during the beta phase, we were able to continuously improve the new app and evolve. Now we present the final version of our new app, Loxone Smart Home version 5!

After the Beta launch, we were inundated with comments about the new app – lots of positive comments and plenty of critical feedback too. Thanks to the suggestions made during the beta phase, we were able to continuously improve and evolve the new app. Now we present the official version of our new app: Version 5!

The updates at a glance…

The new features at a glance 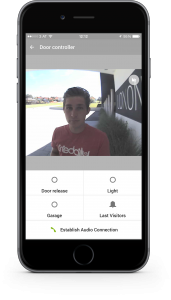 Improved functionality for the Intercom

The new app supports audio for the intercom (SIP). It is now also possible to adjust the volume of the intercom directly from the app.

Our new app now supports voice communication via SIP Intercom systems, such as the Loxone Intercom. 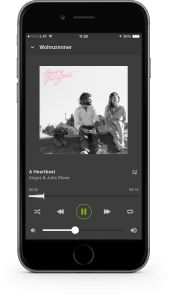 Version 5 brings lots of improvements for our Loxone Music Server which was released in May this year.

Communication between the app and Music Server has been streamlined to allow for faster access to the music you love. 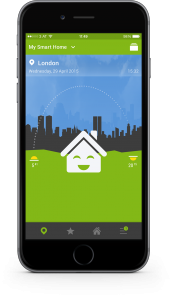 Our Loxone Smart Home App 5 offers more than 20 function blocks for your home, including automatic blind control, lighting control and intelligent room control. You can find an overview off all the new improvements on our website:

As function blocks are added to Loxone Config 7, they are automatically created in the app in the appropriate room and category! No additional configuration of the user interface is required.

More about the Loxone App

With the latest version of the Loxone Smart Home app, we have further improved the performance for both Android and iPhone by streamlining the connection establishment and navigation speed.

With the latest version of the Loxone Smart Home app, we have further improved the performance for both Android and iOS, allowing for smoother navigation and faster connection.

For all Android users, the new app is now available in Google Play Store as well as on our website for download.

Unfortunately, Apple users will have to wait a little bit longer. The app has already been submitted to Apple, and usually approval is granted and the app becomes available in the AppStore within 10 days.

Thank you for your support!

We’d like to say a huge thank you to everyone who helped us test the public beta app. Through your help we were able to continuously improve the new Loxone Smart Home app and create a version that we hope you will love using!

A big “Thank you!” to everyone who participated in our open beta test of the Loxone Smart Home application!